From Judaism 101 – Matzah balls are more traditionally known as knaydelach (Yiddish for dumplings). Matzah ball soup is generally a very thin chicken broth with two or three ping-pong-ball sized matzah balls (or sometimes one very large matzah ball) in it. Sometimes, a few large pieces of carrot or celery are added. Matzah balls can be very soft and light or firm and heavy. Matzah ball soup is commonly served at the Passover seder, but is also eaten all year round. 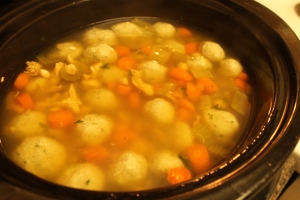 Beat the eggs, oil and water together thoroughly. Add the matzah meal, parsley and black pepper and mix until you achieve an even consistency. Let this sit for a few minutes, so the matzah meal absorbs the other ingredients, and stir again.

Bring the broth to a vigorous boil, then reduce the heat until the broth is just barely boiling. Add the vegetables to the broth (if used). Wet your hands and make balls of about 1-2 tbsp. of the batter. Drop the balls gently into the boiling water. They will be cooked enough to eat in about 15 minutes; however, you may want to leave it simmering longer to absorb more of the chicken broth flavor. They are done when they float on top of the broth and look bloated.

For lighter matzah balls, use a little less oil, a little more water, and cook at a lower temperature for a longer time. For heavier matzah balls, do the reverse. If you are using this to treat a cold, put extra black pepper into the broth (pepper clears the sinuses).