I used to hang out at the old Video Round-Up arcade in Scottsdale back in the day. I even thought it would be cool to own an arcade like Flynn did in the classic Tron movie. Now Cobra Arcade Bar had brought my childhood back to me. This place is a lot of fun and has a cool vibe to it. I discovered while walking to the Super Bowl experience in downtown Phoenix. At first I was a little irked during their opening week when I brought my kid and they wouldn’t let him in (21 and older only). I just wanted him to see and capture the same joy I had as a youngster. But now I’m kinda happy they are keeping this to the older crowd who appreciates the old vintage arcade games. They have a great selection of old school games (about 40 of them) and a cool looking bar for drinks. Ariel Bracamonte and Genuine Concepts are the co-owners of this new rad place. Cobra usually rotates arcade games in and out throughout the week for variety. They even have a row of pinball machines. They have all the classics – Donkey Kong, Pac-Man, Mortal Combat, Street Fighter, 1943, Punch Out and my personal favorite Galaga. The tubular ceiling lights are designed to resemble the iconic arcade game Super Mario Brothers. I love that the games are a quarter (or token) like the old days. I grew tired of the newer arcades that make you buy the dumb expensive game cards. Cobra opens pretty late (2am) and can get pretty crowded on some nights. Especially during theme nights or tournaments. But if you are up for a fun retro night out, come to Cobra Arcade Bar! 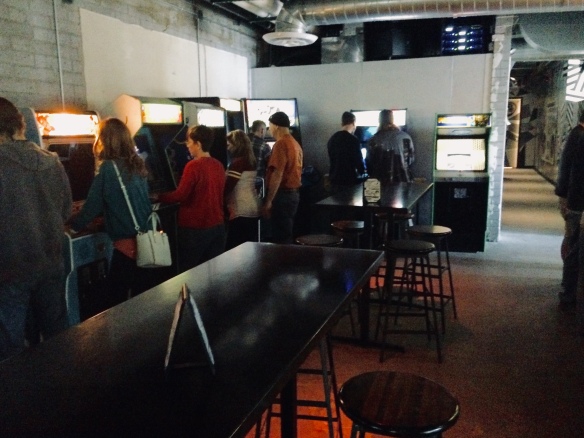