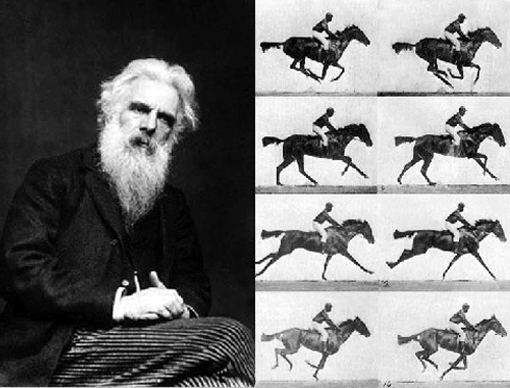 When a horse is running or trotting, do all four hooves ever leave the ground at the same time?

California Governor Leland Stanford offered landscape photographer Eadweard Muybridge $25,000 in 1872 to answer this question. Muybridge invented a fast shutter mechanism that relied on a small piece of wood with a hole drilled into it that slid past the lens. The wood was positioned such that a pin held it in place covering the lens. When the pin was removed, gravity would cause the wood to drop and as the hole moved past the lens, the film was exposed for a fraction of a second. He then used two pieces of wood and slipped them past each other so quickly that he had achieved an exposure time of about 1/500th of a second. Over time he would get it down to an exposure time to less than 1/2000th of a second. In 1878, he finally achieved his results with a sequence of 12 images that clearly showed that all four of the horse’s hooves were off the ground at the same time. Later on he would invent a device with counter-rotating discs that projected the images sequentially called a Zoöpraxiscope.