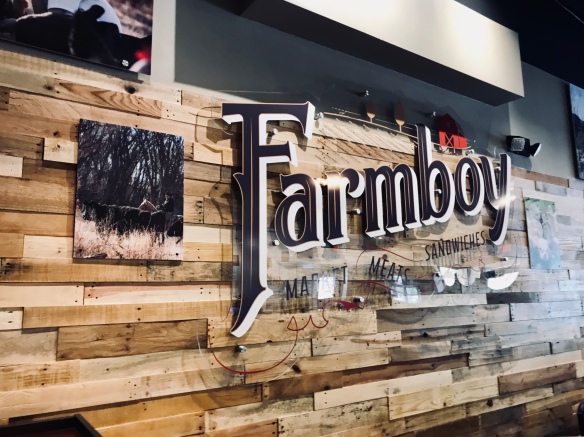 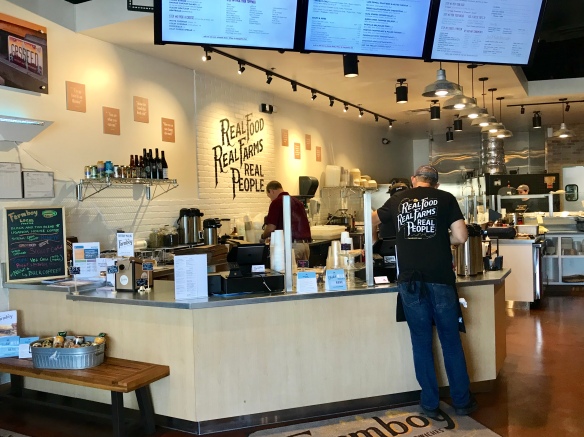 This was a nice little find for lunch. Farmboy, Market, Meats, Sandwiches is a fast-casual restaurant and mini marketplace located in a popular spot that was once operated by Paradise Bakery. They specialize in sandwiches that use wood-smoked meats that are nice and tender because of the slow cooking process. In fact, the moment you walk into the restaurant you get a nice BBQ smell that immediately draws you in. All the meats, produce and bread are locally sourced here in Arizona. The restaurant itself isn’t incredibly large but has both indoor and outdoor patio seating. The ambience is casual and the walls are decorated with beautiful photos of various landscapes in Arizona that pay homage to our great state. 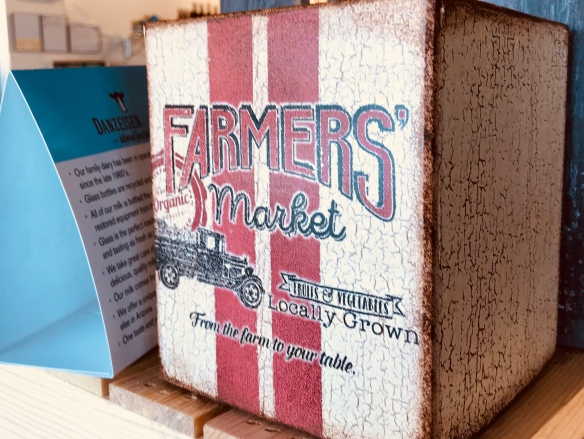 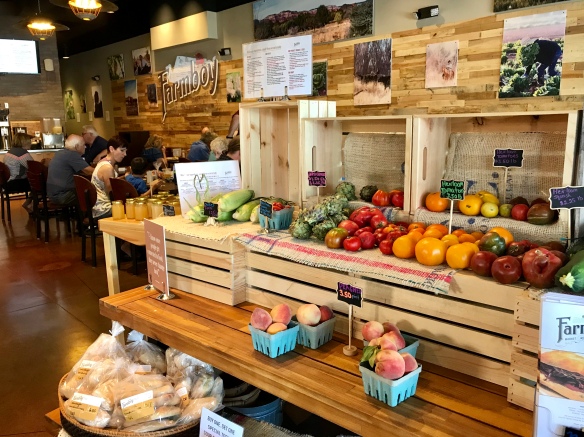 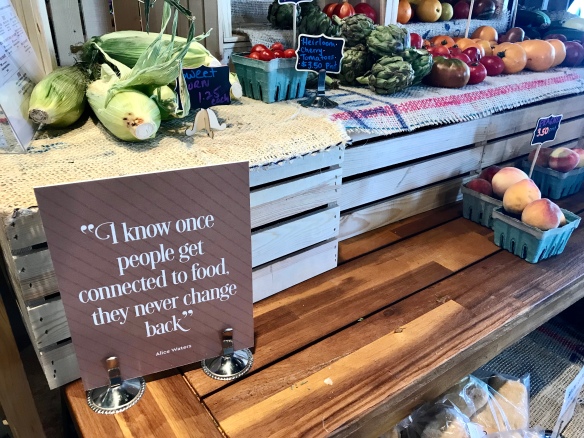 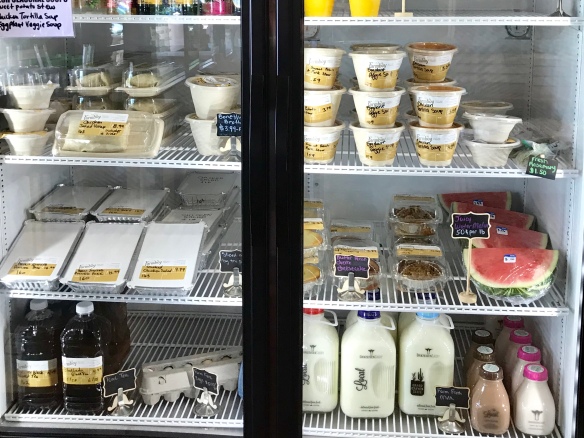 The sandwiches at Farmboy are made from scratch and use only the quality portions of the smoked meats. One thing that is unique is that they are named after different locations in Arizona. Some of the names include the Verde Valley, Lake Powell, Alma School, Coconino and San Tan. If you are a native like myself, you will get a kick out of it. I ordered the Pinetop Beef and Chicken sandwich and thought it was amazing. In addition to the delicious smoked meats, the sandwich is topped with a spicy mayo and honey BBQ sauce that really make a nice blend of flavor. You have a variety of sides to choose from to go with your sandwich. Farmboy also has a small marketplace that you can purchase locally grown fruits, vegetables, eggs, milk (Danzeisen) and meats. They serve breakfast as well in the mornings. If you live in Chandler and are wanting to eat and buy local, this is the place to go. Farmboy is a nice addition to the area. 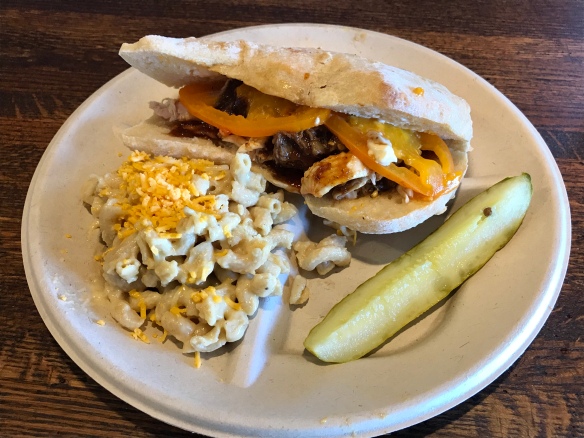 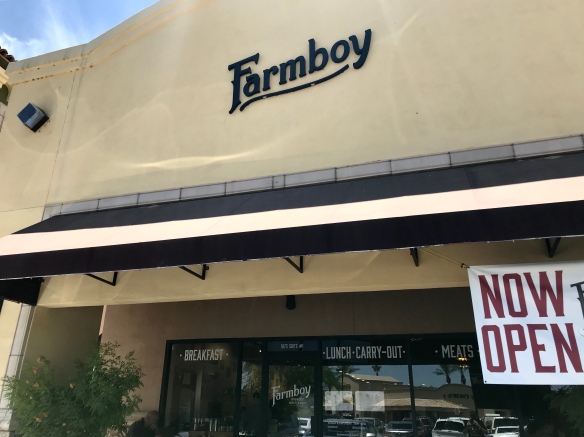 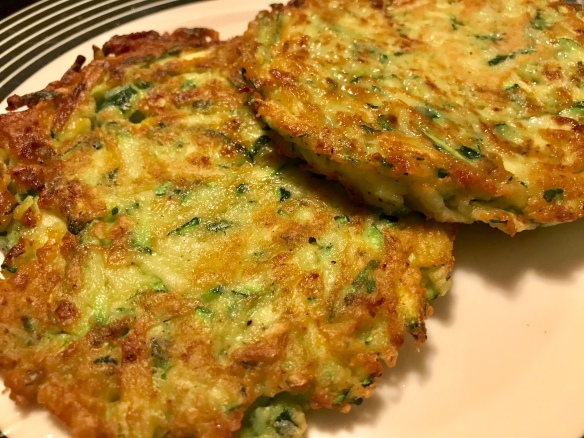 Coconut oil or ghee for cooking 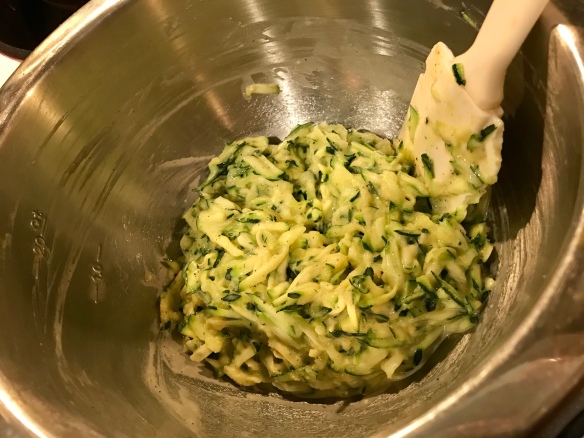 Shred the zucchini using a box grater or a food processor fitted with a shredding blade. Put the shredded zucchini in a large bowl. Sprinkle with the salt and toss well. Walk away for 10 minutes.

Now it’s time to squeeze all the moisture out of the zucchini because nobody likes soggy fritters. Note: If you’re really salt sensitive, you may want to rinse the zucchiniwith water, then squeeze it out. Scoop up a generous handful of the zucchini and squeeze the living daylights out of them into a sink or bowl. You want them dry. Place in a different bowl.

Add the coconut flour, egg and pepper. Stir to combine.

Heat a large skillet over medium-low heat. Melt a large spoonful of ghee or coconut oil in the pan. Pack a ¼ cup measuring cup with the zucchini mixture, pressing it down inside the cup. Turn the cup out onto the pan and flatten the zucchini until you get a patty. You can also use a disher or just eyeball it. I fit about 4 or 5 in a large skillet at one time.

Cook each side for 3 to 5 minutes or until nicely browned. Repeat until you‘ve used up all the zucchini mixture. Be sure to add more ghee or coconut oil to the pan each time you start a new batch.

Cool on a cooling rack so they don’t get soggy.

There is a reason why this place is called Killer Burger – because the burgers are absolutely killer. Their motto is Healing the Hangry. This is their first location outside of the Pacific northwest where they are killing the burger competition. You just have to say Portland, OR and you know that they are going to push the limits in creativity. Every burger is a 1/3 pound 100% beef and includes bacon. The burger that everyone raves about is their peanut butter burger. Bacon, peanut butter, pickle and their delicious smokey house sauce. These guys were making this burger before other restaurants started incorporating it into their menu. You would think the peanut butter would be thick and sticky. But it is actually very smooth and sweet and blends well with the bacon and pickles. It’s a great burger! If you like meat, go for the meathead – a double burger with bacon, cheddar and grilled onions. But my personal favorite is the Jose Mendoza. This is Killer Burger’s first burger. They pile it with bacon, roasted hatch chilies, Monterey jack, grilled onions and house sauce. Do I need to say more? They have quite a few other crazy burger creations that I am looking forward to trying. Each burger comes with fires and they have quite a variety of beers on tap. This isn’t the place to start your vegetarian diet. But if you are in the mood for a mouthwatering burger, check them out. 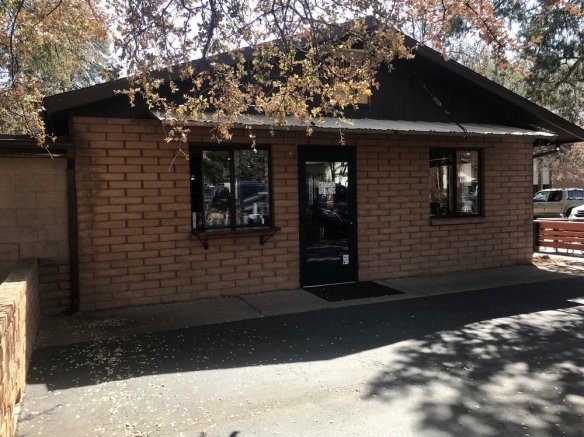 While visiting Rim Country, I yelped best coffee in Payson and this little gem popped up. I pass through many times a year and didn’t recognize the name Common Grounds. I figured I give a local place a shot instead of going to the nearby Starbucks in town. It is a fairly new coffeehouse that neighbors nearby Expedition church (who actually started it). Common Grounds seeks to establish meaningful community in the Payson area. The coffeehouse is cozy and very welcoming. The bar is made of a beautiful dark wood and the décor consists of historical photos and a wall with a large painting of the Arizona flag. Outside is a nice shaded patio area with plenty of seating. On the menu, they have a nice selection of coffee, espresso drinks and tea. They also have pastries on hand and free wi-fi. We stopped in for a bit and really enjoyed our time here. The staff was friendly and our drinks were made just right. One of things I like about this place is that they donate their profits to local charities and organizations within the Payson area. They are all about giving back to the local neighborhood and I’m always a huge fan of businesses that invest in their surrounding community. I love that their cups say “neighborhood coffee house” on them. My only gripe was that we came on a Sunday afternoon and parking was very limited because of church going on. But overall this is a really nice addition to the Payson area. 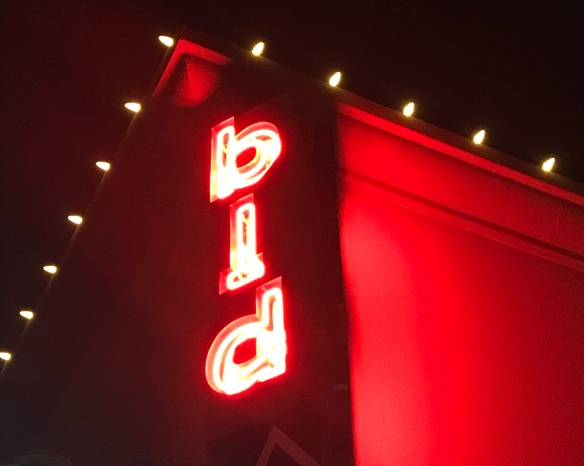 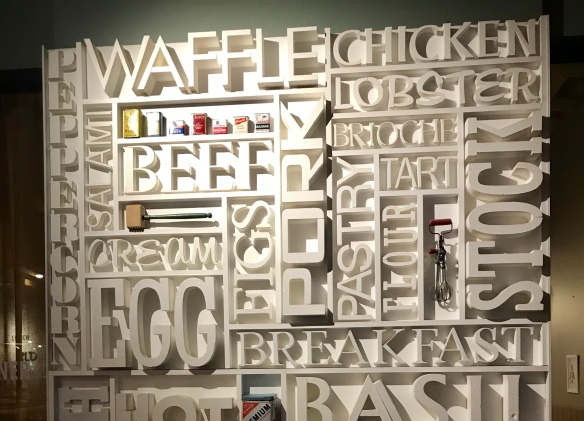 I finally made my rerun to BLD in Chandler. It has been quite some time since I first visited here. They are not only a restaurant that serves breakfast, lunch and dinner all day long. They also have a drive-thru window where you can order coffee beverages, protein shakes, smoothies that are made by a barista. My son and I have been here a couple times now and enjoy the large variety of food on their menu that you can choose from. Our waiter was a friend of my son’s and he hooked us up. BLD is located in the Shops at Pecos Ranch which is home to many of Chandler’s good eats. They also have a great happy hour with discounted prices. 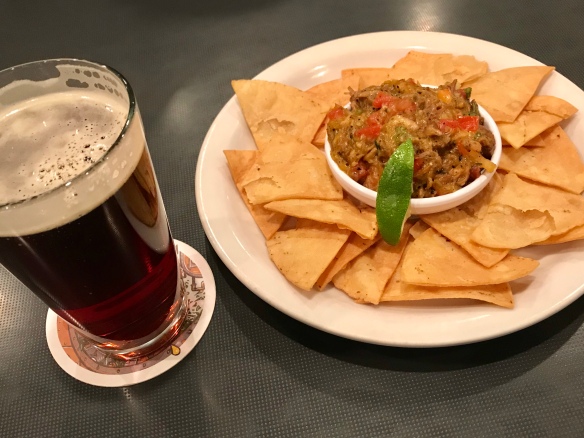 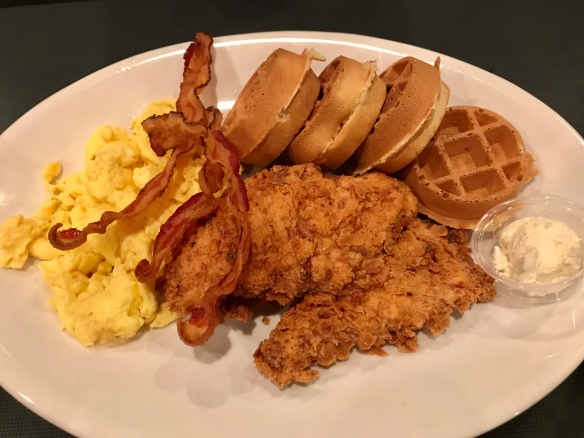 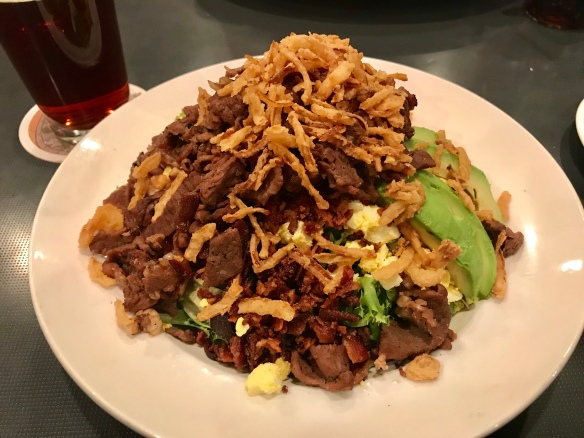 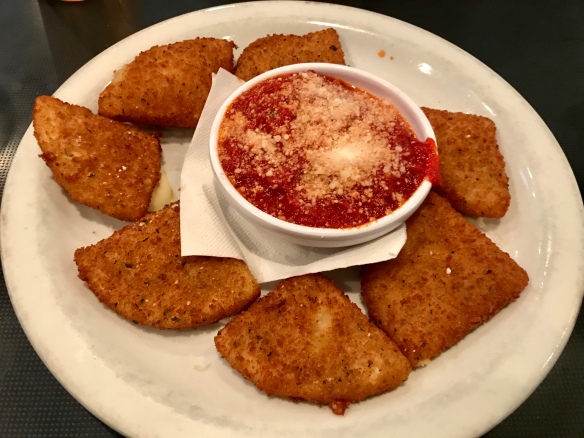 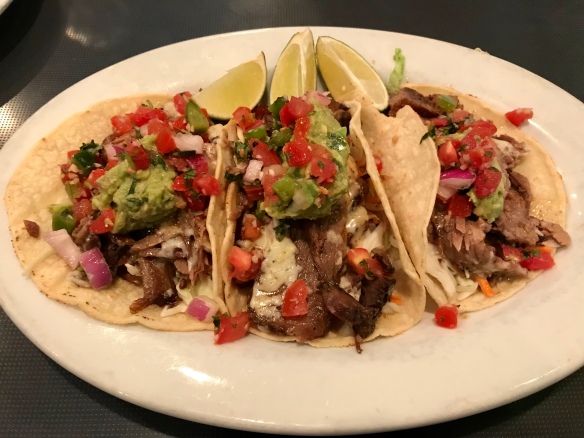 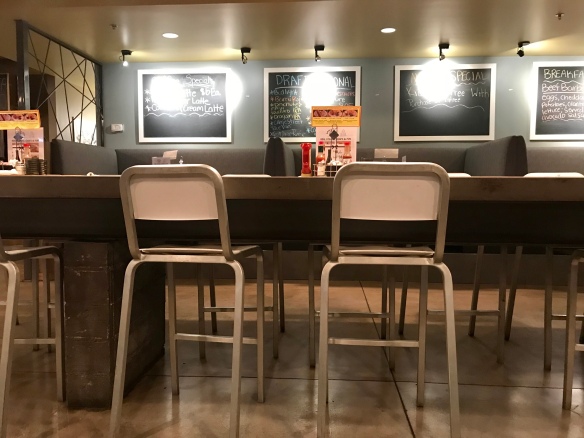 The ice cream sandwich explosion has taken over Arizona! I actually visited a Baked Bear in Pacific Beach years ago after a long night of partying on the beach (they actually got their start in San Diego). It was my first ice cream cookie experience and I remember telling myself we need one of these in AZ. Now we got them everywhere. This particular location is located in the heart of San Tan Village and should do massive business. It’s Arizona’s third Baked Bear location. The menu is pretty simple – pick your cookies (you can have two different types for your top and bottom), pick your ice cream flavor and a topping or two. They press it all together and you have your ice cream sandwich. They have a nice variety of freshly baked cookies to choose from including brownies. If you really want to be a champ, pick three cookies and make it a triple decker. You can also have your treat in a bowl with a spoon if you don’t want it sandwich style. The staff was great and very helpful in explaining the process. I loved their enthusiasm and energy. I’m excited for this new location and look forward to another visit – especially during our fun hot summers! 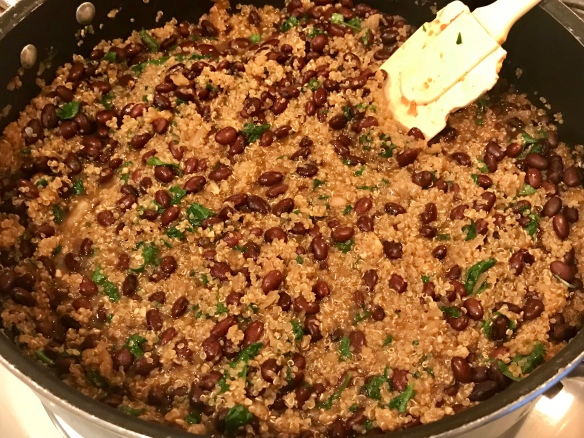 1. Heat the oil in a large saucepan over medium heat. Add the onion and garlic, cooking until light brown, about 10 minutes.

2. Add the quinoa to the pan and pour the broth over it. Season with the cumin, cayenne, salt and pepper.

3. Bring the mixture to a boil. Then cover the pan, reduce the heat and simmer until the quinoa has absorbed all the broth, about 20 minutes.

4. Stir in the frozen corn and simmer about 5 minutes. Stir in the black beans and cilantro and remove from heat. Let sit for a few minutes before fluffing with a fork. Serve hot or cold. 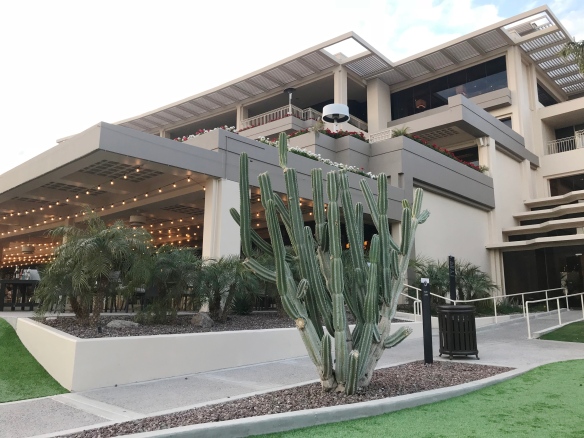 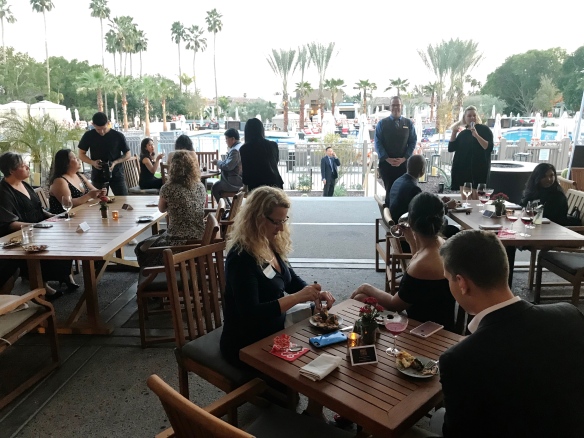 I have so many memories here at the Phoenician going back to high school days. They have been going through some renovations and Mowry & Cotton is their fancy new casual restaurant geared to draw in both visitors and locals. This was one of those fun dress-up Yelp events that incorporated the beautiful views of the Phoenician resort. Mowry & Cotton has a large open patio with amazing décor (the growler wall was a nice touch). We were given the story behind this place from the GM. He mentioned that it is named after George Mowry and James Cotton – two businessmen who opened one of Phoenix’s earliest drinking establishments. We were treated with their signature drink (called the Washington & 1st) from their awesome bartender who worked his butt off for us. It was a blend of commerce gin, St Germain elderflower, blackberry, lime & bitters. I got so caught up with my drinks and the conversation at my table that I forgot to check out the food samples they prepared for us. The seafood was gone when I got there, but I did get to try some of their flatbread pizza. The Wild Mushroom and the Chicken Pesto were both pretty flavorful. But I didn’t miss out on desserts. They had these awesome Lemon Meringue, S’Mores and a Peanut Butter Bar samples that capped off the night. I enjoyed mixing it up with some long time Elites and enjoyed meeting some of the new ones. The best part was the awesome gifts Mowry & Cotton gave us – a choice of a cutting board, a branding iron or an apron. All three were pretty killer. Thanks to our Yelp staff for always being amazing and treating us Elites to a fun night. Read my full post about Mowry & Cotton here. 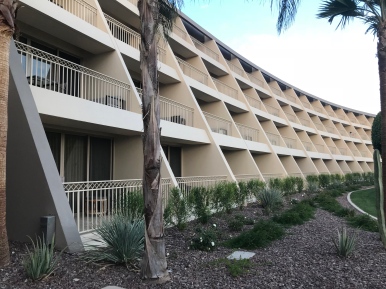 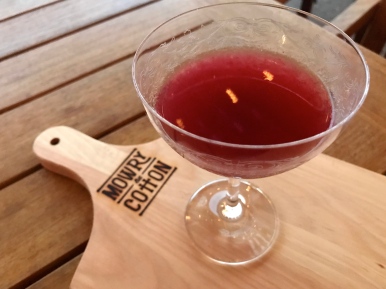 Chilling at The Phoenician 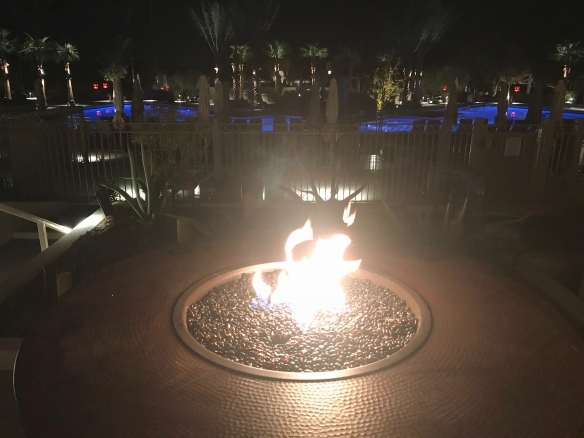 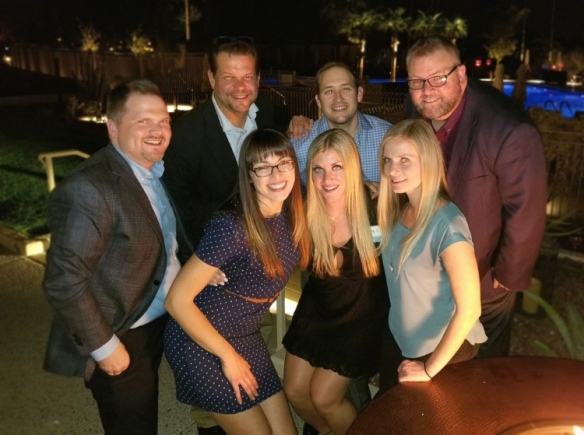 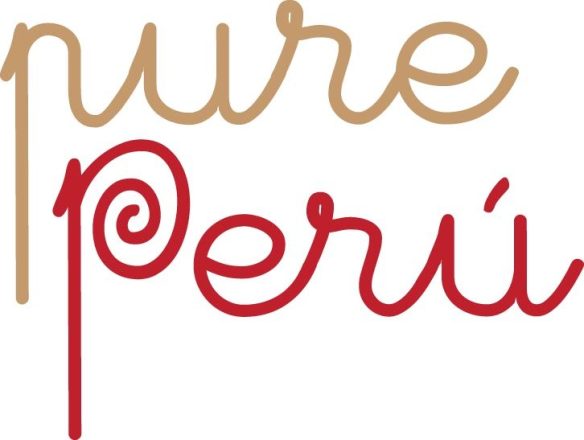 While attending a Pre Super Bowl party at Helio Basin, we were served up drinks from Pure Perú. Pure Perú is a family owned business that imports pisco (a Peruvian colored brandy) from Peru to the U.S. These drinks were amazing! I got to say that Pisco is really crisp and smooth. I tried their Peruvian Mule (recipe below) and loved it! I’m always about culture and it was great getting a little taste of Peruvian culture. I love that they are local and that you can buy their bottles at local liquid stores and places like Total Wine & More. I recommend you give them a try. 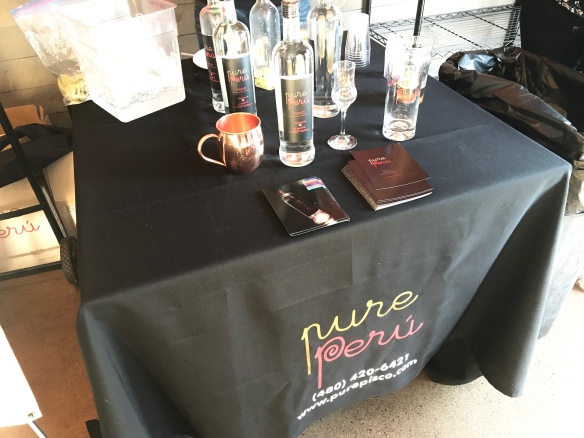 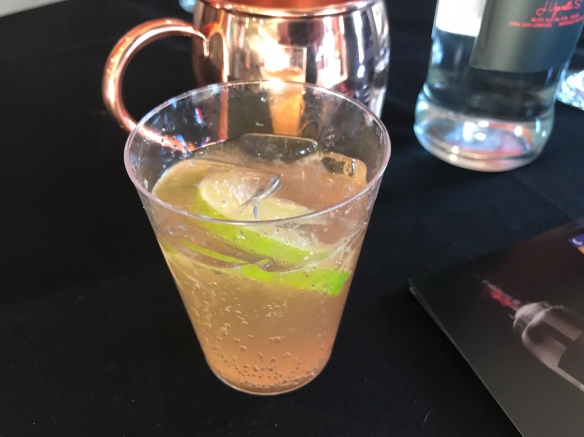 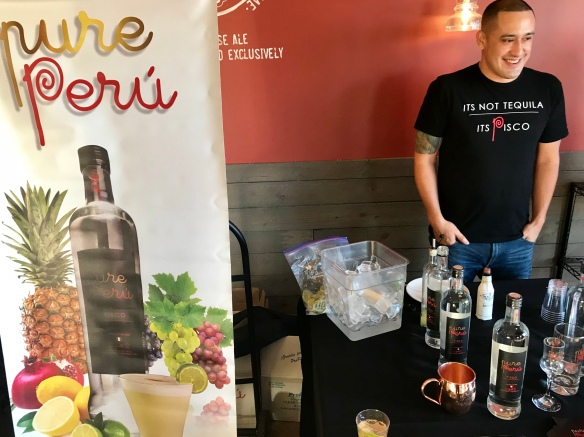