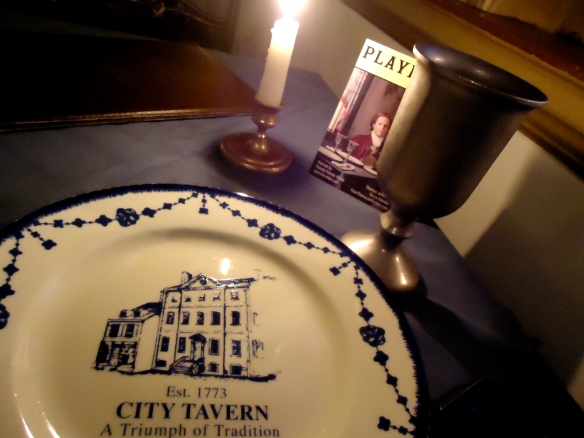 This is one of my favorite stops in Philadelphia. The City Tavern is a restaurant that serves gourmet cuisine using authentic 18th-century recipes inside of a historic 18th-century building. This spot was a favorite meeting spot of the Founding Fathers and of many members of the First Continental Congress after long days at Carpenters’ Hall. George Washington, Thomas Jefferson, John Adams, Richard Henry Lee and Peyton Randolph were some of the regulars. It was built in 1773 and was the location of the first Fourth of July Celebration in 1777. The building was partially destroyed by fire in 1834, demolished in 1854, and rebuilt in time for the 1976 United States Bicentennial. It is owned by Emmy Award winning TV host and James Beard-nominated Chef Walter Staib. He has a cooking show called A Taste of History that explores America’s culinary beginnings by getting to know the Founders through the food that they ate. The City Tavern building has five levels and includes kitchens, a bar room, two coffee rooms, and three dining rooms. Servers and staff members dress in colonial costumes that reflect the times of old. You can order a flight and sample the four main beers that are named after the founding fathers themselves. Research was done to recreate these drinks. I ordered their delicious Colonial Turkey Pot Pie and a Thomas Jefferson’s 1774 Tavern Ale for dinner. This flaky pot pie is filled with chunks of turkey, mushrooms, early peas, red potatoes, sherry cream sauce and baked in a pewter casserole. It was fantastic and I enjoyed my beer as well. This was such an amazing experience for me as I am a huge history buff and this place gave me an opportunity to have a taste of history. 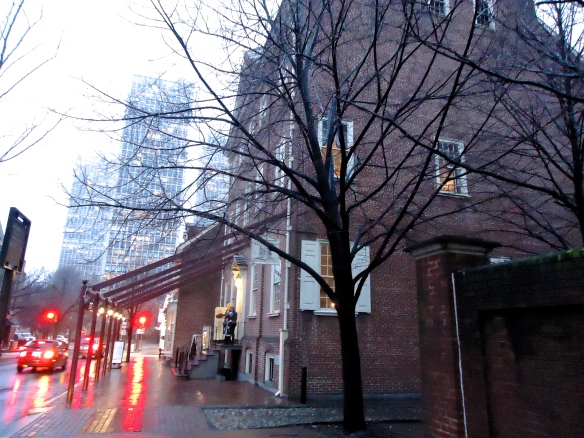 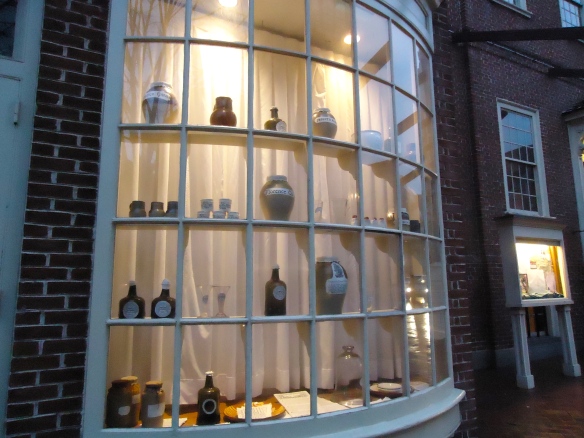 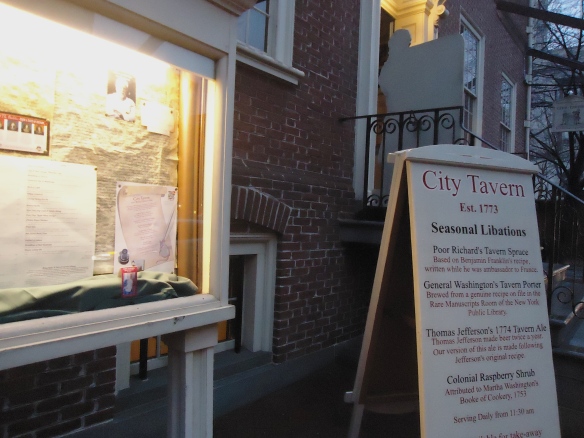 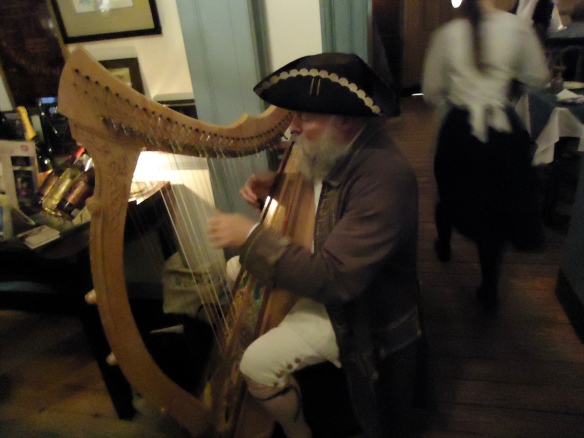 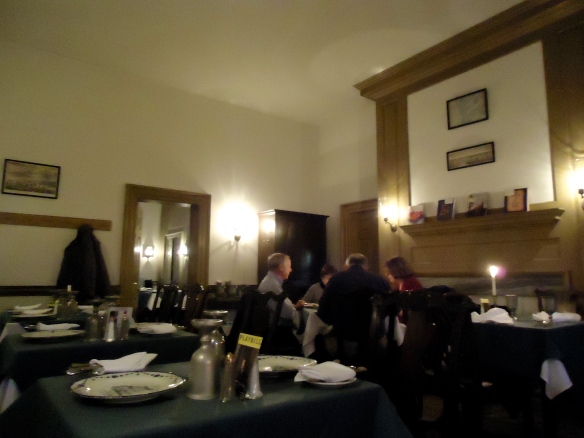 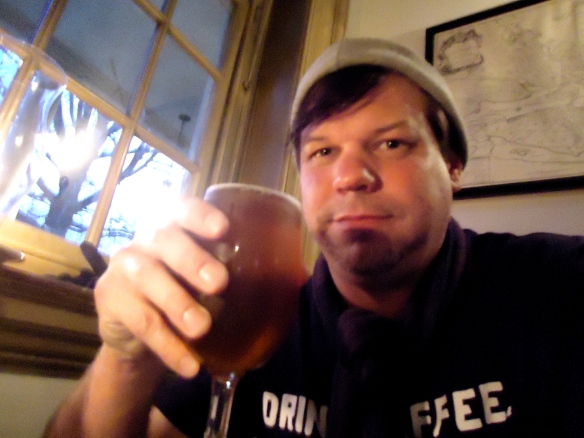 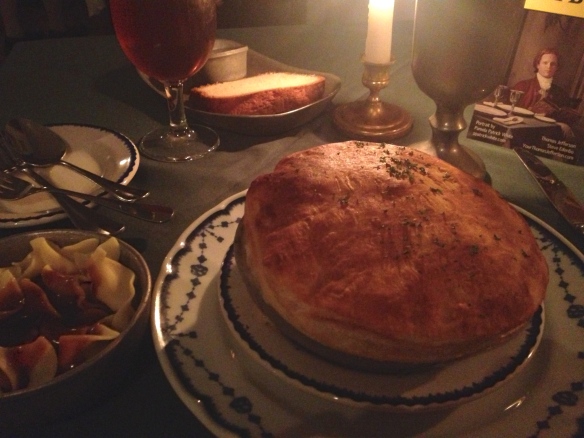 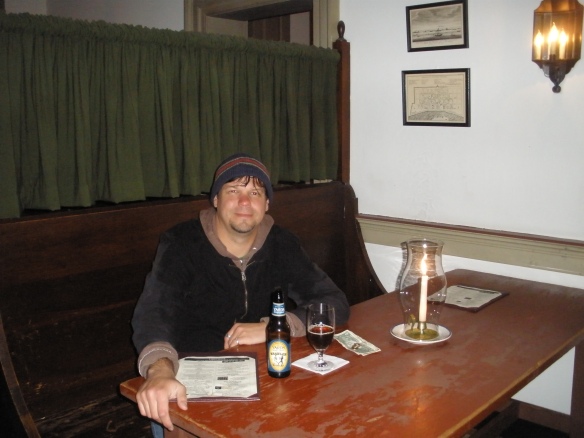 In 2009, I visited Philadelphia for the first time while touring the East Coast and discovered the City Tavern after going on a ghost tour. It was a cold rainy night and I ended up having a Brawler from Yards Brewing Co. It was such a fun first experience for me knowing that our Founding Fathers used to hang out in this spot and drink brews. I noticed that they sell a cookbook of some of their popular dishes. I hope to pick it up someday. 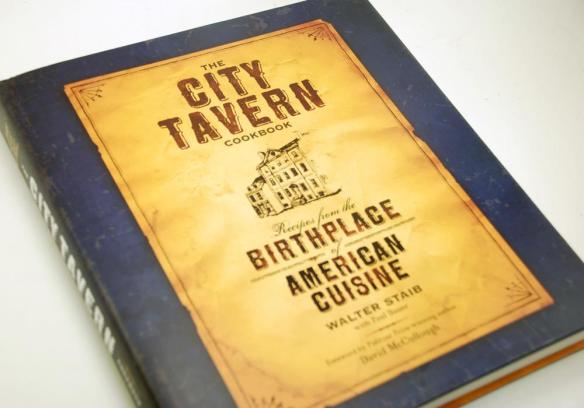 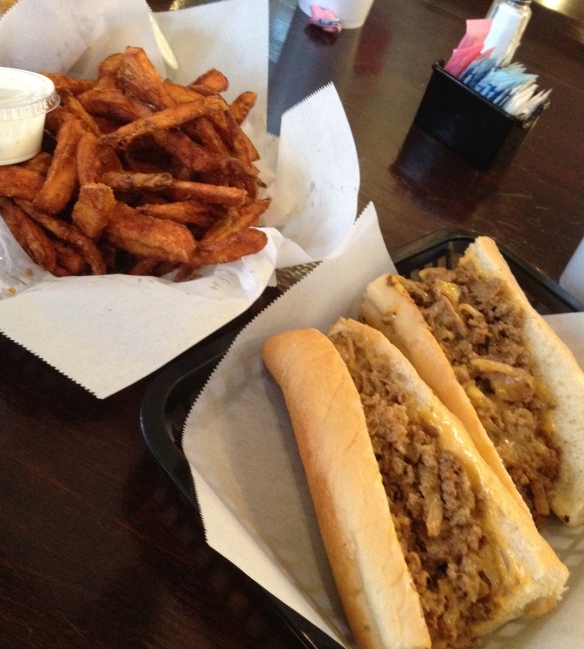 I took my Dad to the Philadelphia Sandwich Company in Scottsdale – home of the Philadelphia Cheesesteak. We went to their newest location in the heart of Old Town Scottsdale. The ingredients to their famous sandwiches include thinly sliced eye-round steak, melted cheese (American, Provolone or Cheese Whiz), oven-fresh baked bread and grilled onions. For me, you always have to go with the whiz. We then walked around the Scottsdale canal project by crossing the Soleri Bridge (2010) by artist Paolo Soleri. We also looked at the large public art The Doors (2007) by Donald Lipski enhanced with sounds with Jim Green’s Sound Passage. The Doors is a kaleidoscopic sculpture that when you walk in it you see multiple reflections of yourself that also contains an oculus that creates the optical illusion of a geodesic dome overhead. It’s an incredible piece of public artwork. 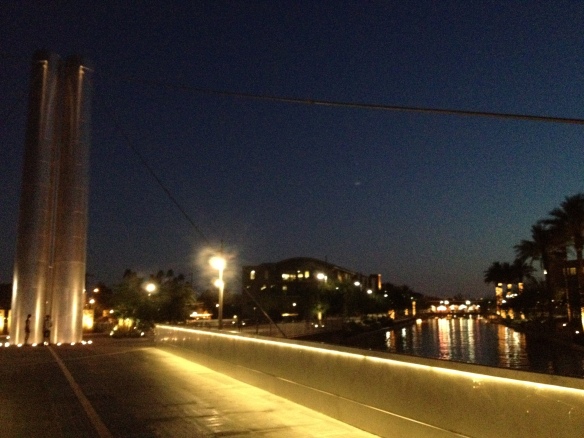 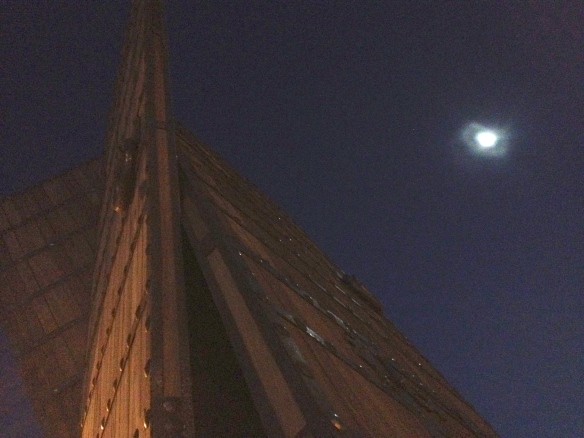 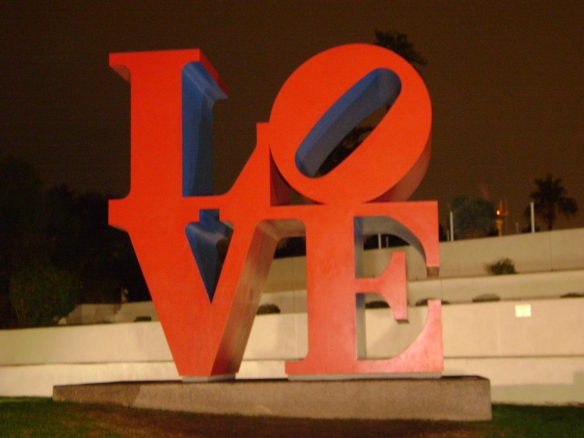 LOVE was designed by Robert Indiana during the Pop art movement in 1964 for a Christmas card. It became a symbol for peace during the Vietnam war. Now many sculptures are present all over the world, some in different languages. The original sculpture is in Indianapolis. I’ve always been fascinated with the LOVE art. I have seen two of these sculptures in person, one in Philadelphia and one here in Scottsdale at the civic center.

While visiting the arts center, I had dinner at one of my favorite little restaurants in Scottsdale, Los Olivos Mexican Patio. This little family owned establishment has been serving up fine Mexican food by the Corral family over 60 years ago. Throughout the years, they have maintained their family traditions in hand rolling their own tortillas and serving up their own unique flavors. Tucked away next to the Scottsdale Arts Center, this restaurant has a unique architectural design that helps brings an intimate family feel environment to it. On some nights, you can catch mariachi bands performing. I’ve been dining here for years and this place has always been special to me. Esta casa es su casa y vuelvan pronto. 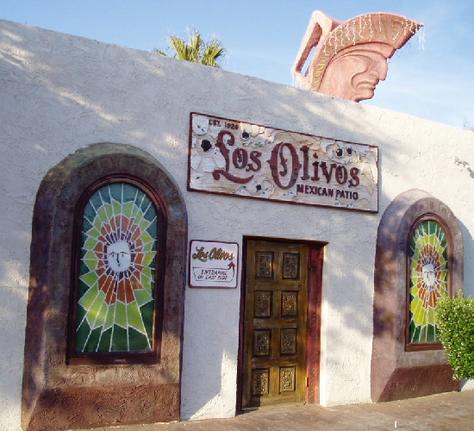 Here’s a little history on the LOVE sculptures I’ve visited..

Edmund Bacon (who is related to actor Kevin Bacon) conceived Philadelphia’s LOVE Park in the 1930’s. It was constructed and finished in 1965.The plaza was dedicated to JFK not too long after that. In the 80’s, it became a popular skateboarding hang-out for kids due the curves of the concrete. ESPN’s X games were held in the park on a couple of occasions due to the popularity of skateboarding there. Controversy erupted in the 2002 when the city then banned all skateboarding at the park. This in turn produced many demonstrations. Even Edmund Bacon rode a skateboard through the park at age 92 to voice his opinion. This brought about the Free LOVE park campaign that is still going on today to bring back skateboarding to the park. Scottsdale purchased theirs through the Scottsdale Public Art Program with support from Pascal and Sylvie de Sarthe, Scottsdale and Simon and Gilian Salama-Caro, New York, in 2002, LOVE is a 144″ (h) x144″ 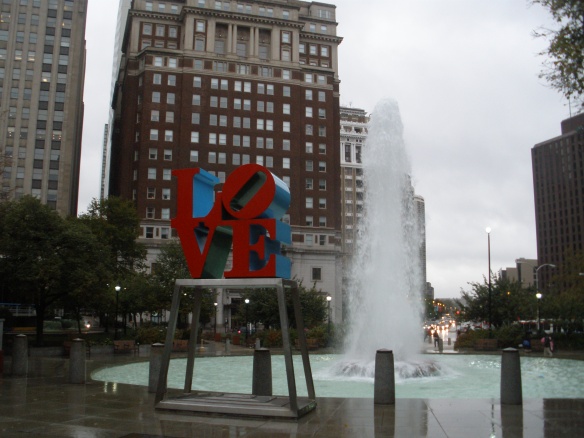 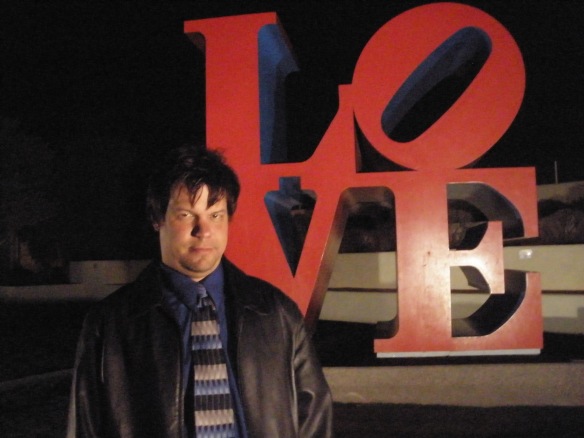 One of my old school late night hangouts is the Philadelphia Sandwich Company. Back in the day when I used to hang out in Scottsdale, I would hit this little place to satisfy my late night food cravings. It’s open 24 hrs and situated right off of Scottsdale Rd. The cheese steaks are huge and served hot right off the grill. But the thing that makes them so good is one key ingredient – cheese whiz! Mixed in with grilled onions, the cheese whiz makes this yummy greasy sandwich so tasty after a few too many drinks. I took Jake here after the Chandler/Hamilton football game so he could experience hanging out at one of my old stomping grounds. 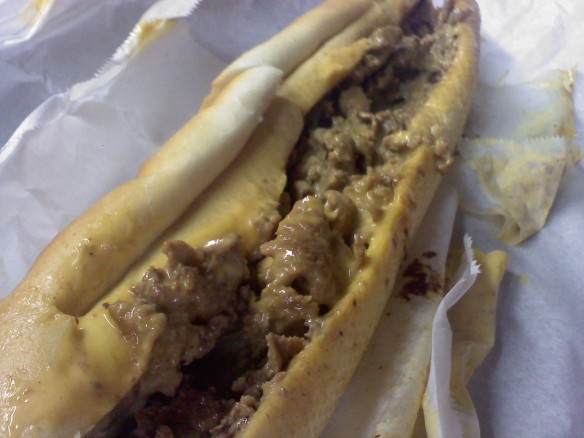